I think God has been trying to tell me something this Christmas season. The message keeps coming out of unexpected places. And even though I can be slow to sit up and pay attention, eventually he gets his message through.

The first uneasy sensation that something wasn’t quite right began as I was writing Shining a light. We were coming up on Christmas and in between my writing hours, I was meditating how Jesus the Prince of Peace was sent to bring Peace on Earth and Goodwill toward men. The feeling was a bit nebulous, but down inside I knew I wasn’t writing from a spirit of peacefulness and goodwill. The MN raw milk study seemed so unfair, unjust, unscientific and so much calculated for maximum hurt to raw milk farmers that I wanted to hurt back. The temptation was magnified by their vulnerability. The poor logic arguments, their obvious agenda and circular reasoning was just too much of an easy target. I justified myself. I was simply telling the truth, shining a light...a bright light. And a bright light, exposing errors, cannot help but create some heat.

But the niggling consciousness that, even in telling the truth, I hadn’t written with goodwill never quite left me. The researchers are people too, and I had way too much fun poking them in the eye.

Then, in a related email conversation, I discussed the MN study with a high-level, very intelligent and open minded epidemiologist. Her explanation of the researchers’ bias only highlighted my lack of compassion. She wrote:

"Note that public health professionals are mostly not cognizant of [safety] efforts by raw milk producers, and have been trained (even ingrained) to see raw milk as a very dangerous product that cannot be made safely..." That would be a completely foreign area for public health when it comes to raw milk (you may as well be asking how to make cigarettes safe to smoke). It’s a little foreign to me too, to be honest...but... I’m spending time engaging and listening to y’all. :)"

Her comment made me consider how, maybe more than I had given credit to, the MN study was written from a position of ignorance and not from malice. Maybe they just simply did not know better.

So I kept thinking and God kept speaking.

The final straw came on Sunday. The sermon was entitled “Loving Kindness” and focused a lot on just how much we (I) have been forgiven by our merciful God and how that fact makes us accountable to also be merciful, compassionate and kind and forgiving to others. Even to those who hurt us. Even especially to those who hurt us. Serious thought that.

So, let me cut to the quick and just say this: With the New Year 2014, I resolve, by the help of God, to approach the conflict resolution of the Raw Milk Controversy from a renewed position of peacemaking and “goodwill toward men.” I welcome you to join me. Giving the benefit of the doubt. Opening civil dialogue. Listening to their concerns and communicating how we farmers address those concerns. Shining a light, yes, but without amplifying the heat. Standing firm and strong and unashamed, yes, but without poking fun and mocking and scorning and belittling.

Will the goodwill be returned? Possibly. At least it will be much more likely than if I poke fun. But probably not always. And that is ok too. The Good Book gives words of wisdom on that scenario as well. “…As much as lieth in you, live peaceably with all men.” (Romans 12:18) At least I know what my responsibility is.

This is, I know, the only way that is right. It is the only productive way to peace. It is the way of Peace on Earth...Goodwill toward men. Through it all, may there be more “Glory to God in the Highest” and to Jesus Christ His Son...the Prince of Peace.

It’s all about Him.

"And suddenly there was with the angel a multitude of the heavenly host praising God, and saying: Glory to God in the Highest, and on Earth Peace, Good Will Toward Men."

What is it About Cows? 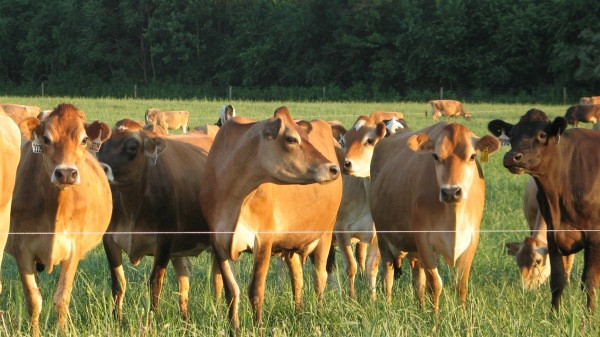