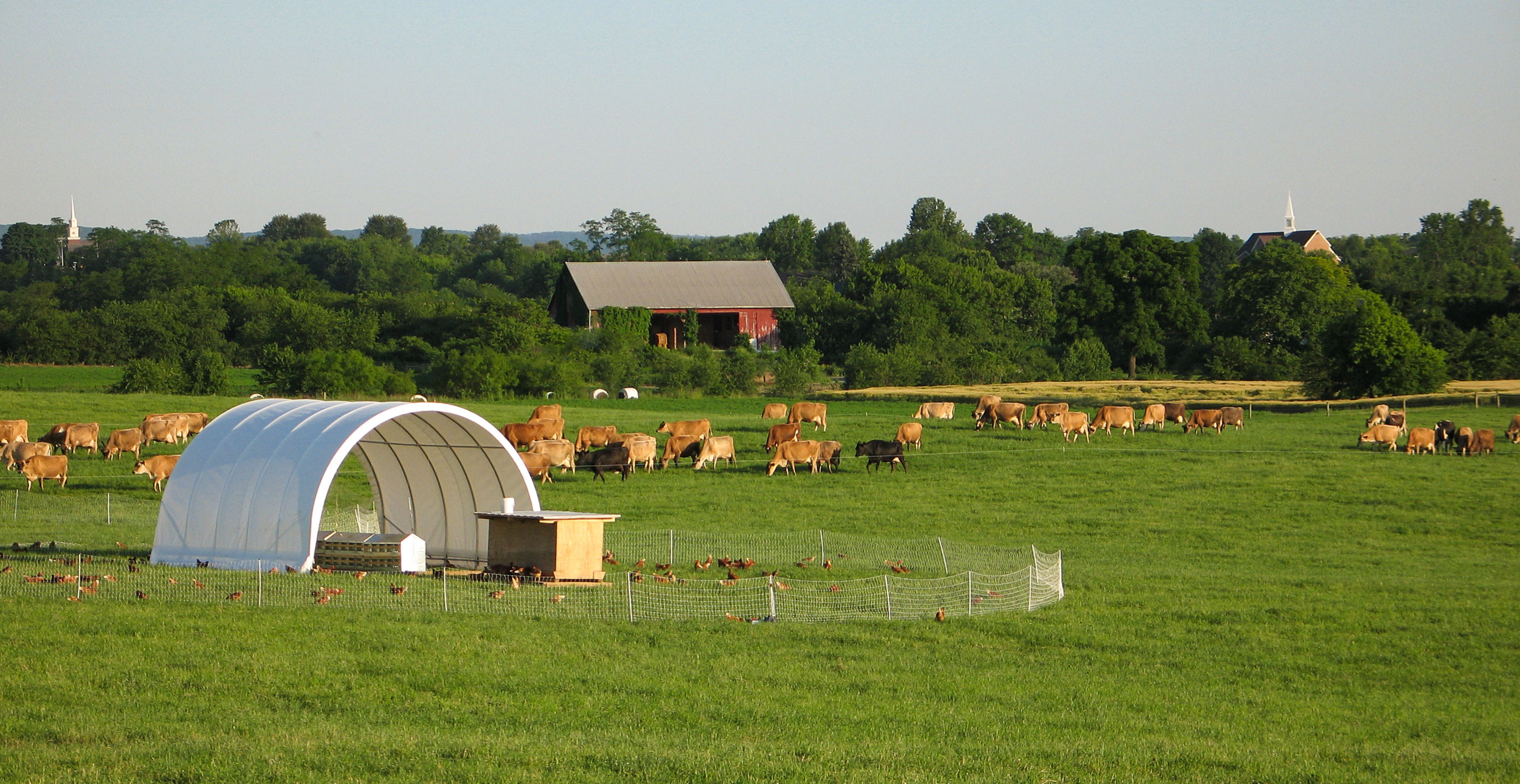 Symbiotic balance of multi species in our Family Cow pastures...

Sometimes I feel like a double agent privy to inside information. Often it's sensitive, potentially damaging information on chemical farming to which, if the "chem farm" folks were wiser, they really shouldn't allow me access. Especially since they should know who I am. You know, one of those lunatic, chemical-free, organic farmers! But they don't seem to know. They keep sending the incriminating info straight to my desk.

I guess the reason chemical farming folks assume I'm one of them is that I used to be. When I quietly switched sides in 2005 I never bothered to send them notice. I didn't intentionally go undercover but it does seem they haven't caught on. At least I can't figure any other explanation for the document Dow Chemical blithely addressed to me a few months ago. 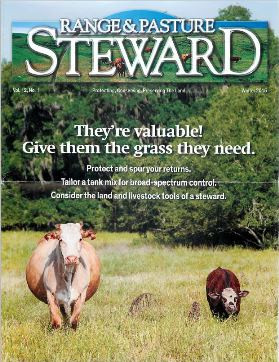 The document was a slick, chemical marketing blitz targeted specifically to grass farmers. It was titled: "Range and Pasture Steward" with a subtitle of "Protecting, Conserving, Preserving The Land." The cover was eye catching: green grass, green trees, blue sky and happy cows.

The spin was well done. And it actually took me in. At least until the third sentence of the first page. When the featured 'steward' of more than 4,000 acres of grass land said, "If I don't spray, this place would be covered in weeds."

It was then I knew.

From there on, terms like: "spray, control, herbicide, kill, knock down, suppress, burn down, soil residual activity and season long control" literally peppered the success stories from the handful of featured "grass land stewards."

I really wasn't surprised. I've known that chemical use among non-organic grass farmers is prevalent. The farmers are convinced that they are normal and we are strange and paranoid.

I flipped the flier over, saw the red Dow Chemical logo on the back, sighed and shoved it for the trash. But something stopped me. And here is what it was. A mental picture of a mom… an innocent, unsuspecting mom, with her newborn snuggled in an Ergo on her chest, selecting 100% grass-fed, all American, non-GMO beef.

In that flash of a moment... I knew I had to tell her.

At least I knew I should tell her. I had an ethical obligation to tell. But I hesitated. I instinctively knew it was dangerous. This could get me into trouble. Real trouble! Dow Chemical is a rich and powerful company…probably second only to Monsanto. And there are libel laws and they probably have a whole team of in-house lawyers...and I'm pretty sure they won't serve me raw milk in jail...and I'll miss my wife and children so much! More mental pictures passing before my eyes...

After a moment's wavering, I said to myself, "So what! Telling the truth never has been easy...nor safe. What good is discovered intelligence if the agent is too paralyzed to relay?"

Lest you think I'm playing this up, stick with me a bit. I’d like to show you the details which, for me, moved this decision into the ethical zone. Then you can decide for yourself.

Some facts about the chemical Dow is selling: It's called GrazonNext HL and is a powerful broadleaf herbicide which is engineered to kill (with over a year's residual in the soil) thistle, clover, alfalfa, dandelion, plantain, milkweed, and 90 or so other plants. About the only thing that it doesn't kill is plants in the grass family. That's why it's loved by non-organic grass farmers. Spray GrazonNext HL on your pastures and...like magic...only a monocrop of grass will grow!

You got to admit it’s impressive business strategy. If Dow can get farmers to buy and apply poison to their pastures to kill thistle along with all the nitrogen producing broadleaf legumes like clover and alfalfa so that their grass becomes yellow with nitrogen deficiency, the farmers will then need to go out and buy more chemicals...this time chemical nitrogen to boost the grass since they killed all the natural, God-given, nitrogen-producing legume plants with GrazonNext HL.

But the fact that this chemical, in general, makes a mess of God's perfectly designed symbiotic relationships in the ecosystem isn't the surprising part.

The first details that alarmed me were in what Dow calls the GrazonNext "Application Advantages."

I just kept thinking as I read it. "I cannot believe the company openly admits this. Do they expect us to be impressed?" (The following quote is directly in the words of Dow Chemical straight out of the promotional flier so that their lawyer teams can't say I wrote something false about them or their product. One of the requirements for libel conviction is that the statement must be false... Believe me, I looked it up!)

With GrazonNext HL, you can spray seasonally dry wetland and up to the water's edge of running water, ponds and lakes.

However, label precautions do apply to forage treated with GrazonNext HL herbicide and to manure from animals that have consumed treated forage within the last three days. Treated forage and urine and manure from livestock on treated pasture may contain enough active ingredient to cause injury to sensitive broadleaf plants. Consult the label for full details.

...GrazonNext HL is not a federally Restricted Use Pesticide and most states do not require a license for purchase or application." END QUOTE

I'm not making this up. And neither is Dow. The allowances above are clearly spelled out on the label. I have no idea how many arms were twisted, and politicians wined and dined and lobbyists paid, for Dow to get approval to label this chemical so loosely.

But what I do know is this: We have a poison which is legally allowed to be sprayed on pasture grasses where cows are present and grazing. The cows can legally consume the poison soaked grass. The poison will admittedly pass through the cows and come out in their urine and manure and still be toxic enough to affect plants. (The manure can stay toxic for up to 4 years by some reports.) Yet at the same time, the milk and meat from those cows, which admittedly are exuding herbicide from their bodies, is pronounced safe and legal to be sold to that unsuspecting mom.

Without any warning at all.

And that, I feel, is not right.

And then there is the specific mention of how you don't need a license to purchase or apply this poison, and oh yes, it's fully legal and you are fully welcomed to spray right up to the water's edge of any and all bodies of water and even in wetlands as long as they are dry at the moment...

Oh, but don't forget that the hay you harvest from the fields is illegal to sell (in all but one state in the nation) because...after all...it has poison on it. But no worries; just feed the hay to your cows and sell the meat and milk. Just be careful, and remember that the manure and compost from your cows could kill plants.

This is so unbelievable. There is not much more to say. "Let them eat cake," comes to mind and seems to have applications.

As distasteful as this first bit of information is...the second is, if possible, even more so.

According to the document, at least some of this beef is being sold into the local, sustainable, farmer-connected, food market. At least one of the "grass land stewards" featured by Dow is doing home delivery of their grass-fed beef...in delivery vehicles painted to look like the breed of beef cows they raise on their farm.

How is that for a farmer connection?

I'm fairly sure the moms who trustingly buy this beef have no idea of the full story.

But maybe I misjudge. Maybe these farmers are transparent and tell these moms that the beautiful grass-fed cows producing their meat are sometimes eating poisoned grass right up to the butchering day. Maybe they explain to them what a marvelous technology this is! Maybe the farmers do explain to these moms that if they were to buy some of the farm's compost to mulch their garden that their tomatoes, lettuce, spinach, strawberries and green beans would probably shrivel, their leaves would curl, turn yellow and quite likely die.

Maybe. But somehow I have my doubts...

It would be one thing if this kind of beef was only sold at conventional supermarkets. I think we all sort of know the lack of transparency to expect there. But direct marketed, straight-from-the-farmer, delivered-to-your-door grass-fed beef! It gives me a deep sense of sadness.

So now you understand why I had to share this. And now you know too and can tell your friends.

Yes, I did have to blow my cover...but the goods got delivered and the message went through. My guess is that a certain chemical giant will remove a certain lunatic farmer from their mailing list yet tonight.

And about the lawyers... I'm really not too worried. I like people and I know you'll all visit me in jail. Call Dawn. She'll give you my cell number.

P.S. I know this article probably raises a lot of questions and I don't have space to get into all of the answers here. It's actually very likely that I don't even have all the answers to your questions. But I just really felt obligated to let you know. This is really only the tip of the iceberg.

Do your research. Aside from GrazonNext HL, there are at least 7 other herbicides that go by different names that also create plant killing manure and urine. So it's not like this is a rare thing.

I'm not trying to scare anyone who really does not mind. If someone actually prefers beef or milk from cows like in the example situation and trusts and has faith in the chemical companies' claims that cows which have poisonous manure and urine can at the same time give meat and milk that is perfectly safe for their family...You must have more faith in the chemical companies than I do.

I'm only telling you this information because I really do think you need to know that this kind of stuff is out there. And you need to be aware so you can make educated choices. (And no, the featured farmers are not our competitors. Most of them are 500-1000 miles away.)

The biggest take-home message for all of you is this: If your beef is not from a certified organic farm, you really must ask more questions than just, "Is the beef grass-fed and is it non-GMO?" While those are some good questions, they really do not go far enough. The above farmers could answer truthfully in the affirmative on both of those questions. "Sure, it's 100% grass-fed all year long and no, we don't do anything with GMO's." "Wow, am I ever glad she didn't ask me about chemical herbicides, pesticides, parricides, antibiotics, larvacides, de-wormers and hormone implants!"

The other option, which is also a good one, is to ask educated questions to be sure the farmer is following organic farming methods even if they are not certified organic.

There are a lot of excellent farms out there that are not certified organic but are following organic principles. And that is perfectly ok. But you do need to know what questions to ask. I hope the info above can help some of you know what kind of questions to ask.

From Cambodia to Azores 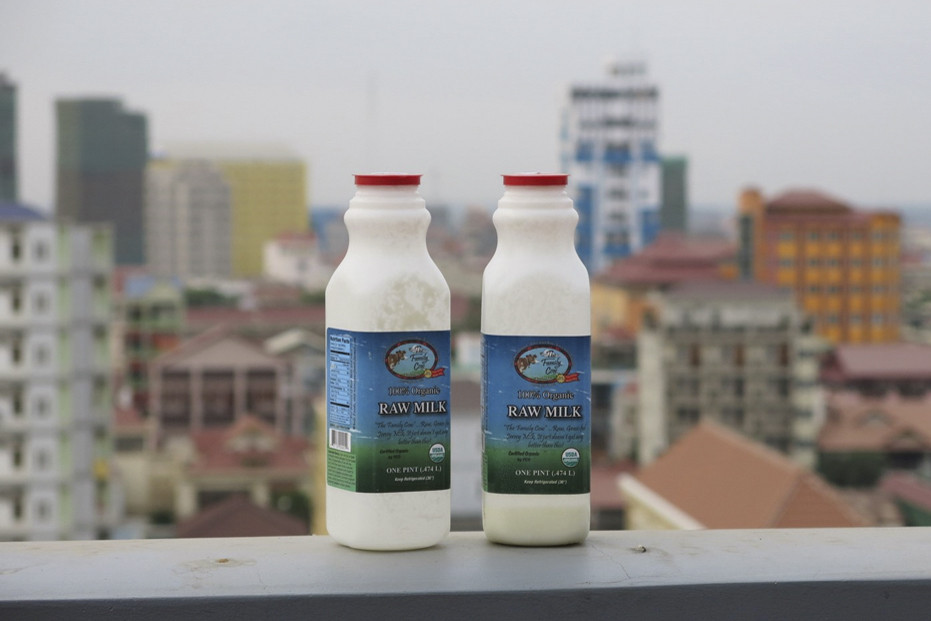 A Morning with Wesley and Roland 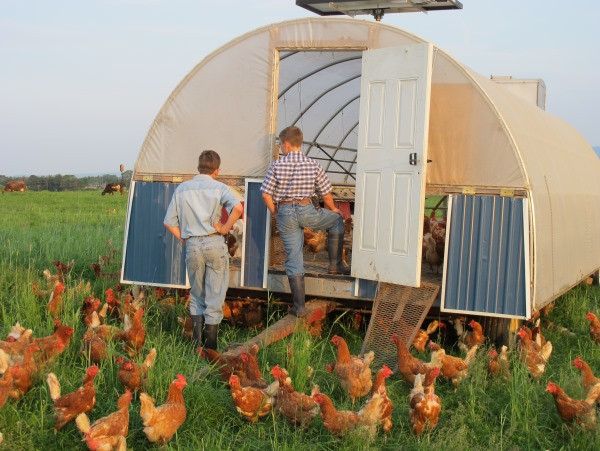